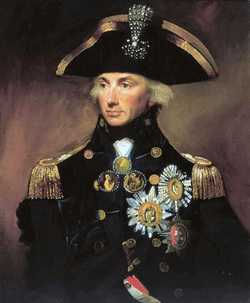 Celebrated on October 21st, Trafalgar Day marks the day on which Britain triumphed in the Battle of Trafalgar in 1805. This historic marine conflict was fought off the Cape of Trafalgar, offshore from Cadiz, Spain, with forces from Spain and France clashing with Britain.

The Battle of Trafalgar made Lord Horatio Nelson one of Britain's most famous war heroes. As Admiral in the Navy, he led our British fleet to victory; a fleet then being composed of warships built from wood, powered by sails and armed with cannons along both sides.

Nelson first joined the Navy at the age of twelve, experiencing many adventures at sea throughout his life. This left him war-wounded - with only one arm and blind in one eye! But this did not prevent him moving up the ranks and becoming Admiral. As Admiral, he was appreciated by his troops; he took great care of them and in return they showed him great loyalty. The Battle of Trafalgar was his most famous triumph but he was well known and celebrated before that for winning important battles in Egypt, the Caribbean and Denmark.

In the time leading up to the Battle, there was a feeling of unrest within Britain as an invasion from France (led by Napoleon Bonaparte) was thought to be imminent. Napoleon had conquered much of Europe and it seemed that Britain would be next on the list. Nelson stepped up to take the lead in planning the attack that finally brought down the French Navy.

27 British men of war and 4 frigates met 33 French and Spanish large ships and another 7 frigates. The experienced, well trained and disciplined British forces met the French and Spanish forces that were weaker in contrast in that most of their best officers and leaders had been either executed or dismissed at the beginning of the French Revolution!  (being considered bourgeois)


Initially, the 4 British frigates were used as bait for the Spanish and French sailors; they hovered, keeping watch over the Cadiz harbour while the main force held back 50 miles away and out of sight. By 15th October,

Nelson had reinforced his fleet and they were at full strength. Vice-Admiral Pierre-Charles Villeneuve on the other hand, commanding the French, was suffering a severe shortage of both men and supplies. But Nelson was forced to send a number of ships to Gibraltar for supplies and then one ship back to Britain with Sir Robert Calder (who had been court-martialed for a lack of aggression in a previous battle), which left the British force depleted and gave Villeneuve a glimpse of hope for his attack.

In attack, the British fleet advanced in two lines (with Nelson and Admiral Collingwood in charge) to meet the French and Spanish fleets who set sail from Cadiz. Nelson was aboard The Victory, the leading ship and, being directly in the line of fire, took a bullet in his back from a French sniper. He was taken below the deck to be treated and later died, but died in the knowledge that his fleet was victorious. Nelson's last words, to his Captain of the Victory, Captain Hardy, cannot be agreed on. The dispute is between whether it was "kiss me, Hardy" or "kismet, Hardy" (kismet meaning fate or destiny). Hardy and Nelson were good friends so the former is a possibility but no one can be sure. The Spanish fleet also lost their Admiral due to the injuries he suffered during the battle, only months later.

When news of the triumph reached British shores, bells were rung in churches, personal and community celebrations were held across the country, even the Theatre Royal put on a special performance. Everyone strived to find a connection with the Navy to become a central part of a national victory. The day marks the beginning of an era when Britain held authority within Europe and mastery of the seas. However, merriment was overshadowed by the loss of an heroic and masterful leader, and so, celebrations of victory also celebrate Nelson and commemorate those lost.

Now every year, the Sea Cadet Corps lead the Trafalgar Day Parade through Trafalgar Square in London. The cadets, a youth movement with a background of traditional practices from the Royal Navy, have the honour of flying the Naval flag at this commemorative ceremony. It is also still possible to visit the HMS Victory year round. It is docked at the Portsmouth Historic Dockyard and although it is not able to set sail again, you can imagine her mastering the waves.

Allegedly where Nelson studied and subsequently named in his honour.  This room has been a study, a library, a board room and a meeting room.  It was panelled in 1927-31 and those donors and sponsors are listed in an oak panel there, also recognising a personal tragedy of the time. 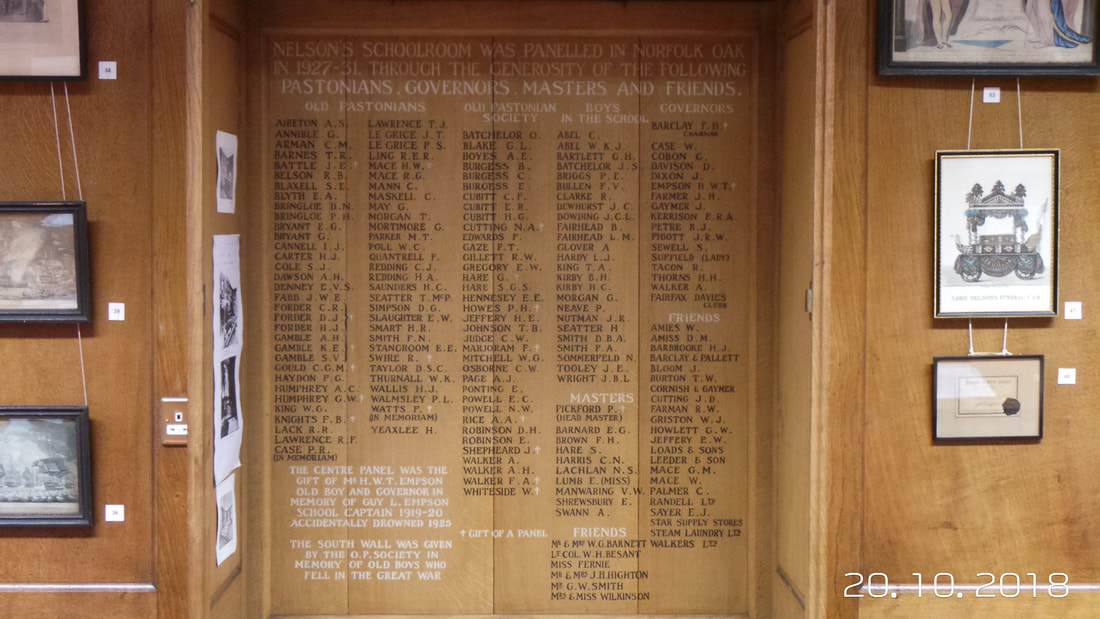 Pete recalls the day(s) that Anglia TV visited the School to make a documentary of Nelson 'in-situ'.  No sign of the actual documentary so far, but an interesting read.  Its HERE.

Update Feb 2019:  Gerald Fisher found it on Amazon, for a small fee, or free if you have Amazon Prime:
​https://www.amazon.co.uk/gp/video/detail/B07BSLQ9CG

It shows the Nelson Room, without carpet, floorboards exposed as some of you may remember.

The SOP site and our reference to Admiral Lord Horatio Nelson would not be complete without this link to the Nelson Museum in Great Yarmouth. Open every day, it includes a wealth of information about Nelson and the period of his life, with details and links to the many other Nelson monuments and his legacy.

Includes letters between Nelson and William Hoste, a sailor protege of Nelson and another Old Pastonian. 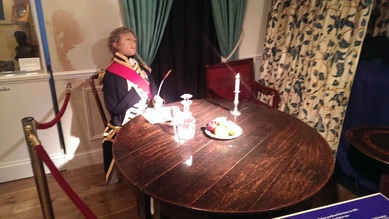 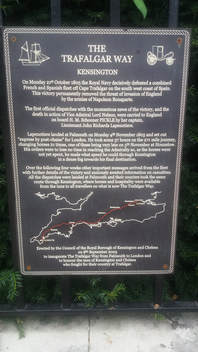 After the battle, news of Nelson's demise was landed at Falmouth and travelled up through the country to London.  By which time Nelson had become even more revered and entered into legendary status!
The Trafalgar Way was followed by more express news about the battle and the plague pictured here commemorates that route and the passing thorugh Chelsea and Kensington Borough on the way to the Admiralty.  The plaque is at the entrance to Holland Park, on Kensington High Street, next to the new Design Museum.

If anyone fancies cycling the whole route one summer, lets get a Society team together and some can do the legs of the journey they want.  It should take a week.  Google Maps says it is 285 miles, so a mere 50miles a day would do it!

Or, a vintage car convoy, with the Paston Shield on the bonnets?  Suggestions on a postcard, or in an email.

If you are looking for more on Horatio, then the Nelson Museum at Gt Yarmouth is an option.  See their website for details.
Powered by SOP - Copyright 2020