See this story below.
We have traced several descendants of Ralph Kahler.  It was a nice Centenary year result to provide this information back.

Note: Ralph is listed as injured in WW1 in the 1917 edition of the Pastonian magazine, recently obtained and scanned here.

Ralph Kahler was a Pastonian at the turn of the 20th Century for 10 years from 1894 to 1904.  As a Lance Corporal enlisted in 1914 in the First World War he applied for a(nother) Commission in the Army in 1915, and the then Headmaster at Paston, George Hare,  provided a glowing commendation in support of this (see photos).

Going to Ypres, in action, he was discharged as Lance Sergeant after nearly 3 years with a right eye and left arm injury, in 1917 and returned to Norfolk to take up a role as Reporter for the EDP.

His Reporters Notebook, birth certificate, 1911 wedding invitation (his sister?), other photos and army discharge papers all ended up in a box retrieved by a collector, Ian Clark, in North Walsham, and they paint a fascinating record of some of his life.

It would be a fitting tribute to this Old Pastonian if these papers could be re-united with any descendants of his.  This could be a challenge, but the record is a poignant reminder  of those that, like Nelson,  went to war having spent time at Paston, and paid a price.

Anomally>  The Birth Certificate is dated 4th August 1859, but on an original registration document that cannot have been printed before 1874.  Assuming he was 15-16years old on leaving Paston in 1904,  so perhaps this date should be August 1889  (with a 5 being written in place of an 8, twice?).   Or perhaps this is the birth certificate of his father? (Ed: the 5 was an 8)

There is a marriage entry for 1911, but Florence Kahler.  Maybe a sister.  Perhaps trace 'EEY'

Any more clues to family...

The following are a small collection of a box of papers located by an antiques dealer, covering a range of Ralph's life: 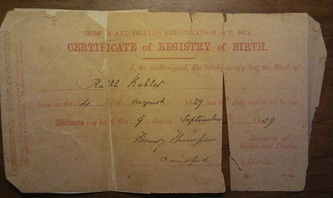 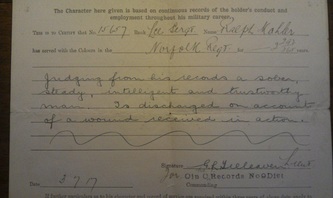 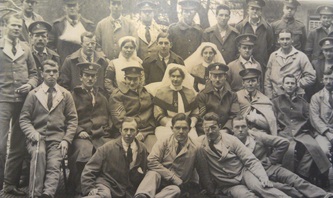 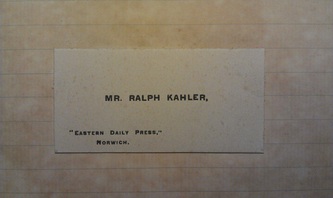 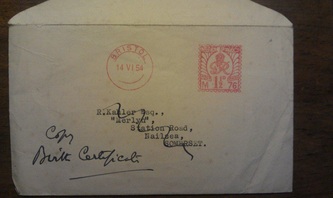 OP Chris Gordan is a guru with genealogy, and took up the initial challenge straight away make some excellent progress as follows:

He may have located a living Kahler descendant, a great grandson of Ralph's brother Henry John Christmas Kahler (25 Dec 1872 - 27 Aug 1913). Chris is waiting for a response.

In the meantime, here's HJCK's gravestone, he's buried in the Rosary Cemetery in Norwich, apparently the country's first ever non-denominational cemetery:
http://www.findagrave.com/cgi-bin/fg.cgi?page=gr&GRid=40806880

Some more research:
On the Norfolk CC website there's a picture dated c1910 of the Kahler bakery at 1 St Julian St, corner of Thorn Lane, Norwich with one of the Kahlers standing in front of it. From the date, the baker pictured is probably Ralph's brother William George Kahler, as he is listed in the 1911 census as living there.
http://norlink.norfolk.gov.uk/02_Catalogue/02_013_PictureTitleInformation.aspx?searchTerm=&searchTerm2=Baker&searchTerm3=&searchTerm4=&search&Page=1&media=&branch=&authority=&language=&junior=&rcn=NP00014585&fr=tl&display

Ralph Kahler, was definitely born 4 Aug 1889 Norwich, died 1968 Somerset (matches the letter to his address there, and death registered Q4 of 1968 in Weston-super-Mare district), occupation 1911 Newspaper Reporter (matches the Eastern Daily Press link, as his EDP business card was in his belongings).

Chris has more details and references for the searching, but its a fantastic step forwards.

Lastly - I found a Genealogy Forum site discussing the Kahler name.  Not sure if useful: http://genforum.genealogy.com/kahler/all.html

Chris Gordans' detective work has resulted in a full descendency chart from Ralph Kahler's father down, and resulted in tracing 2 living relatives (so far).  One is a living male Kahler in the lineage of Ralphs' Uncle.  The other a niece, twice removed (is that a Great, Great Niece)
Having been in contact, SOP plan to return the box of memorabilia in the coming few weeks to the best place.

In the meantime, the following is the genealogy work results:
The tree is from Ralph Kahler's Great Grand Father down.
Ralph Kahler is on Page 7 (on the left hand of the chart if you paste it together).
Ralph's Grand Father (John Martin Kahler) had 10 Children, moving from London to Norfolk.
Ralph's father therefore had 2 brothers and 8 sisters.

One of Ralph's Uncles (Frederick Alfred Kahler) had 6 children.  1 married and had 1 son (Leonard Richard Kahler, born 1913)
Leonard had 1 son, Melvyn Kahler who lives in Norwich.

There is another branch of Kahler from Ralph's other Uncle - Richard Thomas Kahler which results (on p.9) in two younger brother/sister Kahler's (Gary & Julie).  Still researching this line.  Both went to Hewitt School, so good chance still local.