Addendum: one of the facts was apparently wrong.  Nelsons first command was in fact HMS Hinchinbrook when he was made a Captain just before his 20th birthday. (he may have commanded HMS Albemarle pre-captain).
Also, asked how Nelson became a Lord - it came with the award of Baron of the Nile for his most gallant battle there. (apparently a Baron is a Lord).  Whether this would have entitled him to apply to be a sitting Lord at the House in Westminster, I am not sure, but I suspect yes, had he survived Trafalgar and taken to politics.
https://nelson-society.com/faqs/

Thanks all.
The expectation is that in 2022 we will resume physical reunion on the Saturday nearest the 21st October as usual, and also continue a virtual reunion like this year on Trafalgar Day itself, which works well for those scattered far and wide.

The Evening’s Programme
No Sherry Reception

Reunion Welcome and First Toast of the Evening
proposed by John Dring, Secretary, Society of Old Pastonians
Loyal Toast to The Queen

School Song !
An attempt at a remote rendition of the School Song, for traditional purposes, to a previous recording!  All unmuted.

Open Forum
An attempt to give the floor to anyone for comments, hellos, goodbyes.  Raise your virtual ‘hand’ to be un-muted

SUMMARY
Over 30 Old Pastonians joined the evening.  Good response for a last minute notification.  We kicked off with the National Anthem and then an account of the Battle of Trafalgar.  Not too long or it would have been too boring, but hopefully interesting enough.  (note: wiki is a very good account worth a read HERE.  It really was a tough battle AND storm after)

We toasted Nelson and discussed 'dispersed Pastonians' since we had people from Australia, US, Europe, UK on the call.
The open forum was interesting as we recounted various stories from the past, discussed some school trips, masters and headmasters.  It was good to see Old Boys wearing their School Caps even!  Very impressed so many setup with good audio and video, - many using their wives' zoom account which was slightly confusing! (Judy, margo, Anne...).

And yes, we sang the School Song.  Sadly the recording of this slightly bizarre episode failed me, but that's what memories are for.  Maybe next year we will do another Virtual Reunion and/or a livestream of the real Dinner.

Thanks to all in attendance for a good evening, following the annual AGM.  It was a different occasion this year - facilitated by Toastmaster John Driscoll, with some 40+ Old Boys in attendance squeezed together due to larger tables.  We heard about Nelson's time at the School from outgoing President David Gidden and then the history of the toast from John Driscoll.  Patrick Beales again obliged us on the organ for the National Anthem and School Song - always a lottery who gets to sing Rule Britannia for the last verse.  You would think that with most of us 50+ we would all sing that, but we leave it to the 'seniors'.

Thanks once again to Nigel Horner-Glister for the extensive arrangements and catering this year.  Thanks to Patrick Beales as our new organist and for delivering faultless National Anthem and School Song accompaniment.  After Dinner speakers Richard Wright and Patrick Nearney provided wit, humour and laughter

Thanks to all Old Pastonians that attended the 2017 Trafalgar Dinner, on the 212th Anniversary of Trafalgar Day, 21st October 2017.
A good turn out and a hearty rendition of The School Song to conclude the evening.
​

Do you need your chimney sweeping?

If you had been at the Trafalgar Day Reunion Dinner, 22nd October 2016, you would know exactly why?  Thanks again to Joe Woodcock for regaling us with more Norfolk wit about Arthur, as well as a factual reflection on the love life of Admiral Nelson with Emma Hamilton. 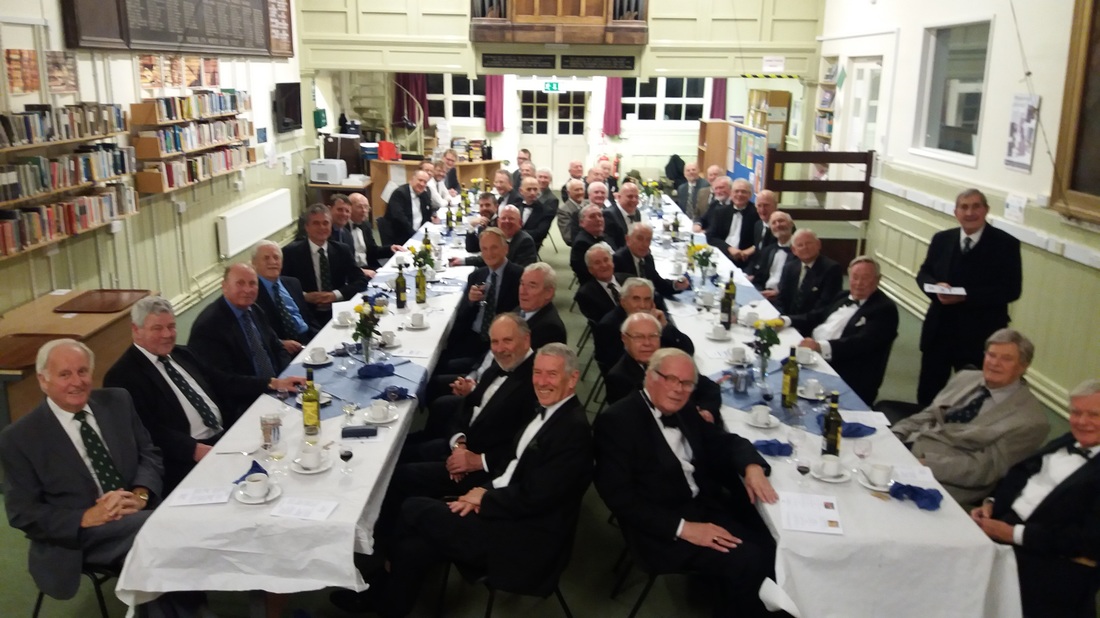 Do you have a goldfish?
If not, then I can tell, amongst other things, that you did not make the Annual Trafalgar Day Reunion Dinner 2015 !

A good time was had by all (I believe).  As we weren't able to fire up the organ for the School Song this year, we made up for it by singing it twice to piano accompaniment.  14th October 2015.

After Dinner Toasts were proposed by Geff Kidd as the outgoing President, and Joe Woodcock as Guest of Honour, with thanks to Nigel Horner-Glister for again organising the annual AGM and Dinner combined.

Was Saturday 25th October 2014.  (a week later than normal due to School availability).

The following write-up and pictures of the 19th October 2013 Dinner appeared in the North Norfolk News.  Nice ties chaps, and Keith Morris complete with old school blazer and scarf!   (Thanks David Anderson for this better copy) 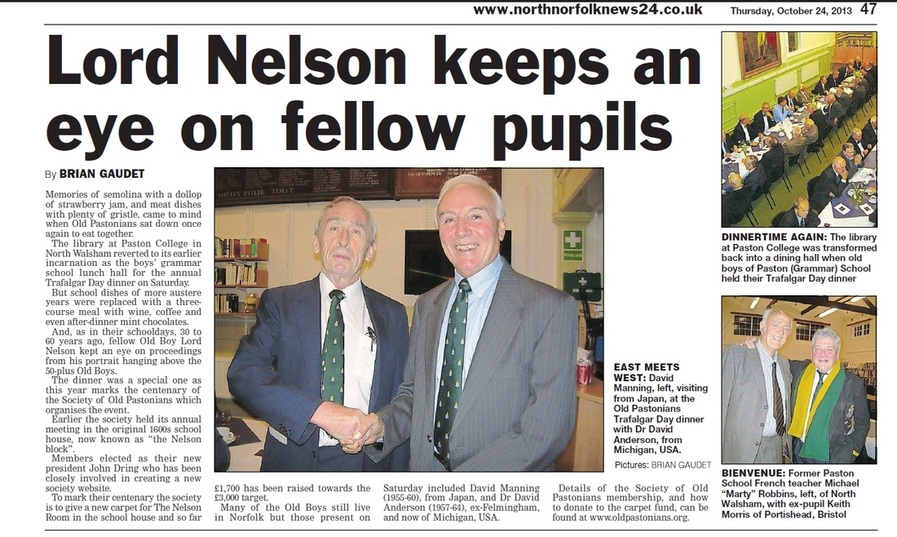 A certain group of OBs have, for several years now, managed to combine a return to the School and the Dinner, with a weekend away with wives and partners.  The ladies in this group 'do their own thing' whilst the Trafalgar Dinner takes part (normally a restaurant in town) and on the Sunday 20th all re-united at a Pub venue  - this year at the Vernon Arms in Southrepps.  See the happy quorum here. Thanks to Keith Morris.