Project to name a Locomotive on the North Norfolk Railway 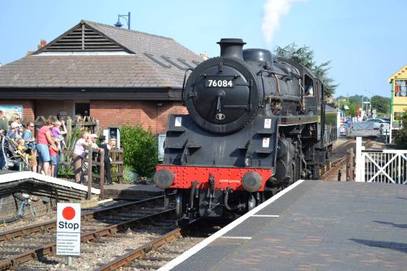 To cut a long story short (mainly because the long story was written and posted, but then got lost, along with a gallery of pictures.  I hate it when that happens):

At the 2014 AGM, it was suggested that there was a Loco which spends its summers on the North Norfolk Railway and which needed repairs and upgrade work to allow it to travel on the main line - all the way to Norwich and beyond (taking into account stops for coal and water).
The proposal was that in exchange for some sponsoship, we would get to name the Loco for one year (its first).  There was talk of collaboration with the Paston Masonic Lodge, or going alone and naming it "The Old Pastonian".

The Pay Back, if you will, would have been a day for members with the chance to ride in a carriage hauled by the engine, and the ability to leverage the event as a promotional event and generally be a good memory and have assisted a piece of history that many old train-boys could relate to.

However, it seems the owners didn't really need the £2k or so that was proposed and the Society also didn't need to be laying down such funds without a Member vote.  And so the idea passed by.

I did however, just see this article about another Loco visitor to NNR, which is nice too see: http://www.northnorfolknews.co.uk/news/north_norfolk_railway_passenger_figures_were_record_breaking_last_year_1_4379855
Powered by SOP - Copyright 2022